Ipswich is the county town of Suffolk, England, located on the estuary of the River Orwell, about 66 miles (106 km) north east of London.

If you’re planing to visit this area, there is a list of must see attractions you should know about:

The Ipswich Waterfront is the area around the Ipswich dock at a bend of the River Orwell which has been used for trade since at least the 8th century.

Since 1999 this area has been developed and nowadays the Waterfront accommodate several activities and attractions such as The Jerwood Dance Centre, The Old Custom House, The University Campus Suffolk, Holy Trinity Church and a variety of restaurants and bars

The Ipswich Transport Museum is devoted principally to the history of transport and engineering objects made or used in its local area. The museum collection was commenced by the Ipswich Transport Preservation Group in 1965 and has been opened to the public since 1995.

A bit throughout the city, several cultural activities are available all year round for dance, theater, concerts and exhibitions. It is good to keep a check for the latest shows in town. 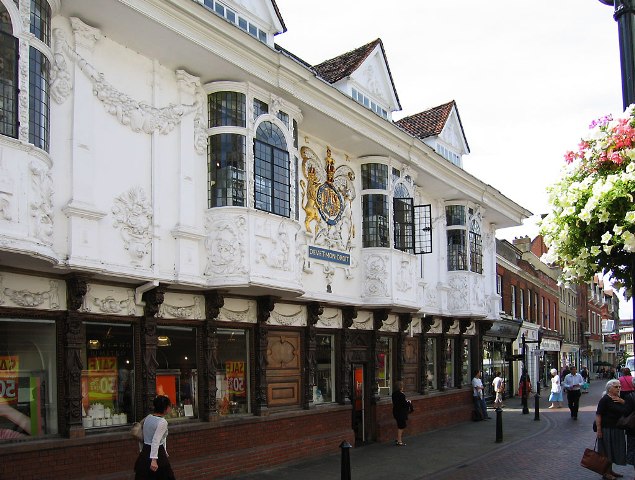 The Ancient House, also known as Sparrows House, is dated of the 15th century and is located in the Buttermarket area. The building sports detailed pargeting, and elaborated wood carvings around the front of the house. Four panels of pargeting show a Tudor impression of the world.

The continents Africa, America, Asia and Europe are shown – lacking Australia which was not discovered at the time.

Photo By Velvet – Own work

Christchurch Mansion, is a Tudor brick mansion house within Christchurch Park on the edge of the town centre of Ipswich. It is now owned by the town and since 1895 has formed one of the two principal venues of the Ipswich Corporation Museums. The mansion houses a collection of pottery and glass, a contemporary art gallery and a collection of paintings. There are rooms preserved as from past inhabitants and are completed with original items of fine clothing. The house sits within a 70 acres (28 ha) public park which features many beautiful trees, rolling lawns and ponds.

Photo by Oxymoron / The “Orwell Lady”

The Orwell Lady is a purposely built river cruiser. It was built in 1979 and currently is operating across 13 miles of the river Orwell. The Orwell lady sails from Ipswich dock to the end of the Orwell at the Port of Felixstowe.

This is probably the best way to discover the deep secrets of any town. Guided by professional connoisseurs, you’ll be able to visit the hot spots and discover many curiosities while you’re visiting Ipswich.

Located only 2 Miles away from Ipswich city center, The Muthu Belstead Brook Hotel is built around a 16th Century hunting lodge, with extensive lawn gardens and its own restaurant and bar.

To find out more about Muthu Belstead Brook Hotel and book your stay at best rates, visit us at www.muthuhotels.com